Heidi Klum Reminds Us to Avoid Stepping On Rusty Nails 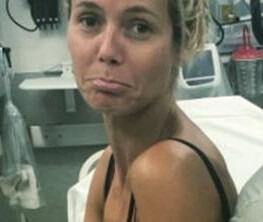 Project Runway Supermodel Heidi Klum and fashion designer Zac Posen wandered off to a beach this past week and stepped on the same rusty nail. They were hospitalized and given tetanus shots. She posted a photo of them both on Instagram and warned others "DONT STEP ON A RUSTY NAIL ..... Well we both did ðŸ˜¨ðŸ˜¨".

As a Seattle foot doctor, I believe they were fortunate for three reasons:

Although most of us are supposed to get a tetanus booster every 10 years, many of us don't. It's important to do so to prevent tetanus, a potentially deadly disease.

Stepping on a nail when barefoot means they only had exposure to the nail. It turns out that stepping on anything sharp that goes straight into your foot when wearing shoes is much worse. Any bacteria, fungus, or funky material from the shoe that gets embedded in your foot can create a nasty wound and infection.

Also, if either of them had been diabetic, a wound from a rusty nail could have much more serious consequences as they often turn into ulcers that don't easily heal.

Of course, the best thing to do is to avoid those rusty nails or sharp glass to begin with. If you find yourself in a similar predicament as Heidi or Zac, call us immediately at 206-368-7000 for an appointment, often same day. You can also request an appointment online.