Webinar: Should I Get Laser Treatment for My Fungal Toenails? 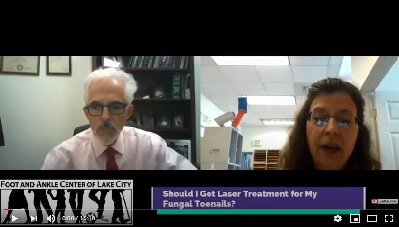 Here is what you'll learn during this webinar:

Should the nails be treated?

First we need to establish a diagnosis of fungus. Everyone who comes into the office with thickened toenails thinks they have fungus. While its true fungus is the most common cause of thickened and discolored toenails, other conditions can create changes in the nails that mimic fungus. Psoriasis and eczema are two of these conditions. In addition, trauma is one of the most common causes of nail changes I see in the office. When I see discolored nails I often learn a patient has participated in sports.

What works and what doesn't?

If I'm not certain of a fungal nail diagnosis, I'll send the nails to a lab to get tested. Once a diagnosis of fungus is made, treatment can begin.

Historically treatment for fungus focused on topical medications. These have been used for many years and there are many kinds. Some of them thin the nails and some treat fungus. Unfortunately, topical medications have a low success rate. Patients who have had success with topicals have needed to treat them daily for a long period of time.

Newer topicals have shown higher success rates. Topical medications as a whole are about 20%-40% successful. The success rate depends on the degree of fungal involvement of the nail and length of time it's treated.

Finally, laser therapy was introduced. Laser therapy has been around for many years. In 2010, a pulsed laser was developed. This resulted in the ability to apply therapy longer and without discomfort to the patient. This laser has been more effective in getting rid of toenail fungus.

Will laser therapy work for me?

To determine what will work for a specific person it's important to consider:

What is a comprehensive fungal nail treatment program?

A comprehensive program includes all of the therapies combined:

There's one difference between your fingernails (which typically don't get fungus) and your toenails and that's shoes. An ultraviolet light is very effective in getting rid of fungus in the shoes and preventing it from further infecting the toenails.

The comprehensive program includes 3 laser treatments and they can be delivered weekly or monthly depending on the level of involvement in the nails. The topicals are used throughout the time of treatment. A short course of oral medications are also delivered during that time.

Together these modalities can offer a success rate of up to 80%-90%.

Toenails only grow out 1 mm/month. We'll look at your nails 4-6 months after completing treatment to see how much resolution we've achieved. At that point we'll determine if further treatment is needed.

In summary, fungus of the toenails is tough to get rid of. It's disfiguring, can be uncomfortable, and unsightly. It takes a comprehensive program to get rid of it.

Questions from the audience

Q: How many laser treatments will I receive and what will it cost?

A: The patient will receive 3 laser treatments. The cost of treatment is $625. That includes the initial course of topical medications and the ultraviolet light shoe sanitizer.

Q: Will I have to pay the full amount up front?

A: The program is paid for in advance. We dispense the topical medications and the ultraviolet light and have the patient use this for a couple of weeks. We also provide a nail file to thin the nails to allow the topicals to penetrate the nails before we begin laser treatment. The patient then returns to the clinic to receive the laser treatments. The laser treatments are usually done every week, but can be spaced farther apart if there is less involvement of the nails.

Q: How do I know if I'm a good candidate for laser treatment?

A: I'm very honest about what I think the chances are for success. When a patient has extremely thickened toenails from the end of the nail back to the cuticle in all the nails and a long history of fungus it's much tougher to resolve the problem. It can require more than one round of treatment. I'm cautious in recommending laser or any other approach in that case. When there is less nail involvement, maybe only part of the great toenails and some of the other toenails then we have more predictability regarding success.

Q: How soon can I expect to see results?

A: The nails only grow 1 mm/month. When we first started treating with laser I had patients back too frequently and too soon because I too wanted results. Now I tell my patients they need to wait. The therapies don't eradicate the fungus already on the nail. Instead after several weeks and months we'll see the new nail coming out clear of fungus. Eventually the portion of the nail with fungus will grow out and be trimmed off. That takes at least 4-6 months.

Call us today at 206-368-7000 if you need appointmen for your fungal toenails. Often same day for emergencies and less than 2 weeks for chronic foot pain. You can also request an appointment online