What Is Toenail Fungus and How To Treat It? 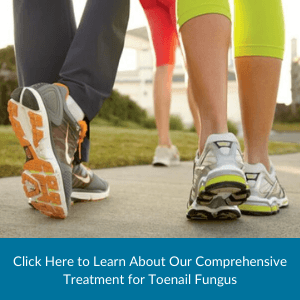 Onychomycosis or toenail fungus is an infection of the nails/toenails that is caused by a group of microscopic organisms called Dermatophytes (Derm=skin and nails Phytes=attracted to or grow within ). These include the most common fungi that cause both athletes foot and nail fungus, and less common yeasts and molds. The fungus has enzymes that break down the nail plate and allow the strands (hyphae) of the organism to penetrate the nail.

Where did toenail fungus come from?

It is theorized that sometime in the late eighteen hundreds, these fungi were transported to the United States from Asia and Africa. The increase in the occurrence of fungal nails is related to our lifestyle, certain diseases that decrease our immune system’s ability to fight infection, and our ever increasing aging populous.

Who gets toenail fungus?

Anyone can get toenail fungus. Today 36 million Americans suffer from this condition.

However, there are several things that can increase your risk.

Are all ugly toenails, fungal nails?

No. Many times ugly, discolored, or misshapen toenails are not caused by fungus. Although nail trauma, aging, illness, and tight shoes often result in nail fungus, sometimes it does not.   Dystrophic, distorted nails can sometimes be visually assessed as fungus by a podiatrist, but doctors will often send out toenail clippings to a lab to be analyzed to ensure that nails aren't treated for fungus unnecessarily.

What does it look like and how is it diagnosed? 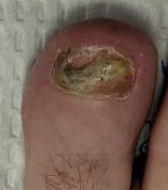 The most typical presentation is gradual invasion of the nail from the tip extending back, with thickening, brownish to yellowish discoloration, and detachment of the nail. The nail can also be infected from the cuticle outward which is less common and may appear more whitish. It can also appear as a chalky, white, patchy invasion of the whole nail plate. (Here are more photos of nails with toenail fungus.)

In most cases, the diagnosis can be made by your physician’s evaluation. When there’s a question about the clinical appearance, additional testing such as a nail biopsy can be ordered.

There are other disorders that can cause nail changes that mimic fungus. Pitting of the toenails can be seen in patient with psoriasis, seasonal allergies or eczema. Severe trauma or microtrauma can also cause a nail to become thickened permanently, with or without fungus.

How is it treated?

The following treatments have been used to treat toenail fungus with varying levels of success.

One of the keys to success with laser treatment is finding a podiatrist that includes a fungal toenail prevention program. This involves education about how to prevent re-infection, including hygiene tips, products for sterilizing shoes, use of anti-fungal creams, and other solutions which can increase the efficacy of laser treatment.

There are many reasons for treating onychomycosis.

Fungus is everywhere. Here are some steps you can take to avoid getting a nail fungus infection.

Whether a cosmetic problem, a potentially infective or a painful one, developing a safe and effective program for onychomycosis is the specialty and responsibility of your podiatrist.