Are You At Risk for Toenail Cancer? Black Toenail Treatment in Seattle 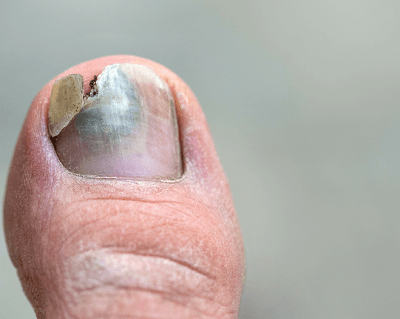 While it's extremely rare for someone who is young to develop nail cancer, it did happen to Miss Illinois Karolina Jasko. She was only in high school when she found a vertical line under her fingernail. She didn't go to the doctor until it became infected. Then she was diagnosed with melanoma.

She was fortunate. She only lost her nail. Melanoma can spread to the entire body and can be deadly. It may be surprising but melanoma is the most common skin cancer found on our feet. And the survival rate is poor in comparison to when it's found in other parts of the body--just 52% vs. 85% respectively. That's because it's usually detected at an advanced stage when treatment might be too late.

While you might think that living in Seattle would protect you from toenail and other skin cancer, it's not true. If the Puget Sound area was a state it would rank 4th in the nation in skin cancer rates. It might be because we don't tend cover up or use sunscreen because we get so little sun all year long. Or so we think. Even when it's cloudy outside we forget that we're still exposing ourselves to harmful UV rays.

While melanoma of the toenail is rare no matter what your age, it's important to be seen by a podiatrist if you have bruise under your toenail that doesn't go away.

Although some dark bands can be non-cancerous and caused by a bacterial or fungal infection it's important to get it checked out as soon as possible.

Although it's not possible to prevent the condition, early identification and treatment provides the best chance for effective treatment and survival.

Treatment options depend on how early the melanoma is detected. They include surgery, chemotherapy, and radiation.

Other Cancers Affecting the Feet

Other types of skin cancers that affect the feet more often than nail cancer are basil cell carcinoma, squamous cell carcinoma, and malignant melanoma. For information about how to prevent these skin cancers, see "Protecting Your Feet From the Sun Can Avoid Skin Cancer Disaster". 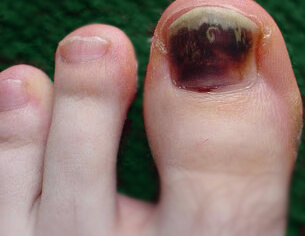 Other Causes of Black Toenails in Seattle

While skin cancer of the toenail is rare, other causes of black toenails are common.

Black Toenails in Hikers and Runners

Hikers and runners often develop black toenails, usually due to wearing footwear that is too short or doesn't fit correctly. Constant pressure against the nail can cause a subungual hematoma or a bruise under the nail.

Injuries to the Toenails

Black toenails can also occur due to injury to the nail. Dropping a heavy object on your toe or badly stubbing it can damage the nail.

Toenail fungus is another cause of dark or discolored toenails. Fungal toenails are more common in runners and hikers particularly when shoes don't fit properly. Constant pressure to the nails can cause them to lift, allowing fungus easy access to the nail bed. Learn more about toenail fungus and how it's treated here!

While not very common, ingrown toenails that recur can turn your toenails black. If you've had no trauma to your nail and are prone to ingrown toenails, contact your podiatrist right away if your nail turn black. This can be a sign of a bad infection.

Need To Get A Black Toenail Checked Out in Seattle, Washington? Request an Appointment Now

Don't let black or fungal toenails cause you embarassment. Complete the contact form on this page or call our office at 206-368-7000 to schedule an appointment with Dr. Berg.

Most new patients are seen within 1-2 week's time. During your initial visit, Dr. Berg will spend up to 30 minutes getting to know you, your podiatry complaints, and your goals so that he can recommend the treatment best meets your needs. Don’t wait—contact us today.

North Seattle Foot & Ankle Specialist Dr. Rion Berg offers compassionate podiatry care for all foot and ankle problems to those living in Seattle Washington and the surrounding areas. Call us today at 206-368-7000 for an immediate appointment or request an appointment online.