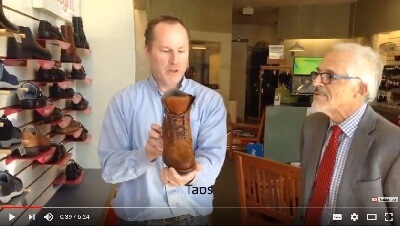 DB: It's definitely no longer the weather for open toes and Oofos and flip flops and Birkenstocks. What are you suggesting for all of these people now this time of year?

JB: The biggest thing for fall is boots. What we look for of course is good arch support. For example this cute little boot here (Taos) is very trendy and kind of fun. It's got a zipper on the side to help with access but of course you always have to have good arch support (Jason removes arch from boot to demonstrate).

Boots are often known for being really hard to get into so what they'll often do is open up the back of the heel to have a little bit of slippage. Boots often have a little more play in the heel but as long as it's holding you and you're walking naturally you're OK. So whether it's a boot with a lower heel like this one or a nice tall boot (pulls a Dansko off the shelf) you want to be able to get into it and then stay in it.

DB: One of the issues I find that occurs as people move into the fall and they move into boots is the harder sole. What can you put inside the shoe or is part of the shoe itself to combat the tendency for overuse in the ball of the foot?

JB: It's a great question and it's a real problem. You're absolutely right, because a lot of boots are just leather (on the bottom) and they're very hard with very little cushion. We focus on shoes that have a removable foot bed, so if needed we can add extra cushion. (An example of a boot we carry) is Dansko which is waterproof and comes with.. "feel the cushion on that". It's way better than a lot of other boots.

As you're out there and you're trying to find good boots you do have to keep an eye out for that. They'll (boots will) look super cute and might even feel comfortable but do they have enough cushion? And if they don't can you add cushion? Because you're right I'm sure you see it a lot when the ball of people's feet just gets beat up or tender.

DB: Well this is nice because both of these styles which are two different brands have removable inserts which allow for either more shock absorbing over the counter support or if need be, prescriptive orthotics.

JB: Yes, we really specialize in that because it is important especially if you have orthotics you often feel restricted and all you can wear are tennis shoes. Maybe you want something a little more fashionable it can be hard. That's why we focus on that. Every single fall shoe we carry with the exception of a few has a removable foot bed.

I do want to show one that is kind of unique. The brand has been around for a long time.  Alegria. But this is a new sole, a new boot. It's slip resistant, non-marking and also has some good tread; maybe we'll get some snow. But the other thing that makes it a really, really special brand is the removable foot bed and look how cushioned that is (hands it over to Dr. Berg).

JB: Lots of cushions and it's replaceable. The first thing to wear out are usually the insoles. It just loses its cushion. Getting the exact same thing to go back into it (into the shoe) can be hard and next to impossible. So with this brand you can get the exact same foot bed.

DB: This also has quite a substantial outer sole and its shock absorbing. It's a rubber sole.

DB: I notice in the same brand (Alegria) we move down to walking shoes it looks like almost the same tread and it's slip resistant. I assume a similar insole.

JB: It's identical, yes. The new collection from them everything under the foot is the same as you'll get in that boot and they also scotch guard all their leather, so it's really great for the Northwest. In fact, talking about the Northwest I call them Northwest dog walking shoes. I want to highlight just a couple. There are shoes like this, a Dansko shoe (Paisley) that's great with blue jeans it's just a nice little kick around. It's slip resistant and look at this foot bed. It's got a great insole in there, a good arch. But the fact that it's completely waterproof, you can walk the dog and wet grass won't bother your feet. You can walk the neighborhood. It's just really great for the Northwest. We have a lot of shoes like that. Whether it's (like) this, or (something) a little more athletic. You want to feel good but you also want to look good.

There're a lot of good shoes out there for fall you just have to take the time to find the right one and get the right fit. And then of course if you have any foot problems or issues talk to the doctor (Dr. Rion Berg) and find the right solution.