Not All Hammertoes Are Created Equal 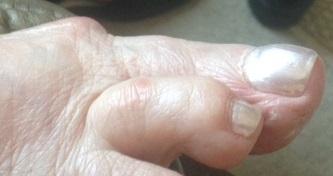 When is a hammertoe not just a hammertoe? When it's a serious injury to the ligament in the second toe of the foot. These findings were shared this past weekend at the 74th Annual Scientific Conference of the American College of Foot and Ankle Surgeons in Austin, Texas.

That's why it's important not to make assumptions about our foot health. So many of us turn to friends or the internet for answers and we can end up putting off an important trip to the podiatrist.

But They Look Alike

Although it's true that both a true hammertoe and an injury to the plantar plate (the area just beneath the second toe) can look alike, that's where any comparison stops. Both will typically appear as an abnormal upward bend in the joint.

Hammertoes typically start out mild and get worse over time. Also, most people have them in several toes, not just the second toe. Most often hammertoes are caused by a genetic predisposition, arthritis, or from wearing tight or high heeled shoes.

Treatment consisting of padding, new shoes, orthotics, and other non-invasive procedures are usually effective for hammertoes in the beginning stages, but latter stages often require surgery.

On the other hand as mentioned earlier, the hammertoe look-alike is caused by an acute injury to the second toe or plantar plate ligament and the pain is moderate to severe. It has nothing to do with heredity or shoe type since it occurs suddenly.

Immediate treatment is similar to other acute injuries, such as using RICE; rest, ice, compression, elevation. Anti-inflammatory medications can also be used to keep down the swelling. However, surgery is most often required, with a six week healing process.

So don't delay a trip to your Seattle podiatrist just because you think you know what's wrong with you. Be sure to avoid further injuries.

Get our free foot book "No More Foot Pain", mailed directly to your home.